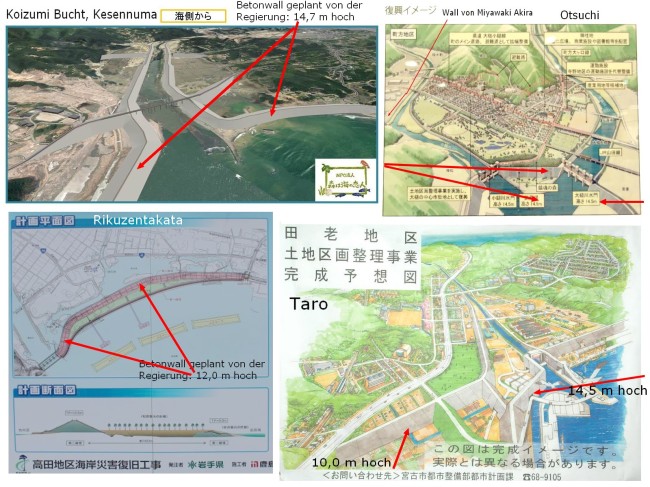 Tsunami protection—or a boondoggle for builders?

LIKE hundreds of places along Japan’s northeast coast, the village of Koizumi exists on maps only. Three years ago, an earthquake under the Pacific Ocean triggered towering waves that carried away over 18,000 people and caused a meltdown at the Fukushima Dai-ichi power station. The deluge flattened Koizumi and drowned 40 of its 1,800 residents. In a country that endures a tsunami every seven years or so, the survivors know that at some point another such calamity will surely happen.

Japan’s government wasted little time announcing a favourite solution: pouring concrete. A few months after the disaster it pledged to build hundreds of seawalls and breakers in the three worst-hit prefectures of Fukushima, Miyagi and Iwate. The total cost will be up to ¥1 trillion ($9.8 billion). More walls are planned. A report by the ministries of agriculture and land said 14,000km of Japan’s 35,000km coastline requires tsunami protection.

Seawalls are controversial. They look hideous and the evidence for their effectiveness is flimsy. True, Fudai, a village sheltering behind a giant concrete shield, escaped unscathed in 2011. But in the city of Kamaishi a $1.6 billion breakwater, listed in the “Guinness Book of Records” as the world’s largest, crumbled on impact. Nearly 90% of existing seawalls along the northeast coast suffered a similar fate. Critics say they even resulted in greater damage being caused elsewhere. “There is simply no guarantee that seawalls will stop every single tsunami,” says Nobuo Shuto, an engineer at Tohoku University.

Mr Shuto, though not against all seawalls, wants a rethink. So do many others—including, surprisingly, Akie Abe, the prime minister’s wife. For months she has been gingerly speaking out against a plan for more seawalls signed off by her husband, saying it could damage tourism and destroy local ecosystems. Last December she met Yoshihiro Murai, the governor of Miyagi Prefecture, home to the largest number of planned seawalls. Mr Murai said he had seen too many people die in the disaster to reverse course. “We were not on the same page,” lamented Mrs Abe.

The same inflexible response has greeted residents across the northeast, says Hiroko Otsuka, a campaigner who grew up near Koizumi. She says decisions made in Tokyo are almost impossible to reverse. Koizumi’s 14.7-metre wall will cost ¥230m, replacing an embankment built after an earlier tsunami. But the village it is designed to protect has been moved 3km inland. The wall will defend rice paddies, says Masahito Abe, a local teacher.

Even more puzzlingly, the land ministry admits the new structures are not designed to withstand the sort of seismic event that occurred in 2011. That earthquake is considered a once-in-a-thousand-years calamity and nothing could block it, says a spokesperson for the ministry. Koizumi’s wall is less than half the size of the highest wave that hit the area three years ago.

The walls may even make things worse. The 2011 deluge killed Ms Otsuka’s mother and her brother’s two children. They could have been saved if they had fled 10 metres up a hill behind their house, she insists. They didn’t run because they thought the seawall would protect them.